DELIVERING AND GIVING BIRTH. Dialogues and separations during pregnancy 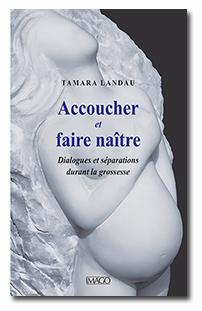 Pregnancy is a time of great upheaval, a source of both anxiety and rejoicing that transforms the lives and bodies of those experiencing them forever. That is when the astounding power of creation of women manifests itself, a power that is an object of universal fascination.
Nowadays, in France and all around the world, we can rely on many different kinds of preparation for childbirth, such as yoga, haptonomy, singing, sophrology, etc. These methods are very useful, they help parents welcome their child and complement the process of birth. What is suggested in this book pursues the same project and enriches it. We aim to teach mothers-to-be how to listen to their babies while they are still in their womb, to talk to them during pregnancy, and to prepare them for birth long before delivery.
At the moment of birth, the baby is already nine months old. In other words, it already has a history that its parents, the mother in particular, have been able to shape since conception, when it finally comes into the world. According to ancient oriental traditions, Chinese ones for instance, the newborn is one year old at birth. That is why we celebrate our birthday and we symbolically bury the two pre-birth parents at the same time. This tradition emphasizes the idea that will be developed in our book: during pregnancy, a very close bond between the fetus and the parents is created. They project their love, their desires, anxieties, hopes and fantasies on the child, even before conception. At birth, they must get rid of these projections, anxieties and fantasies, bury them as it were and begin to invent a new relationship with the newborn based on how the fetus was perceived, imagined and dreamed of during pregnancy.
We find this idea of oblivion at birth in the Old Testament, later resumed in a popular Talmudic commentary: that of the angel who comes at birth and gives a little pat on the newborn’s mouth to silence it and force it to forget what it already knows. In this way, what it experienced before birth is repressed. Because, as an embryo and then as a fetus, it is supposed to have heard, read and learned everything. There remains a trace of the angel’s gesture, namely the furrow between the nose and the mouth, called philtrum in medical language, a word that comes from the ancient Greek philein, meaning “to love”. A word that, in French, evokes a “love potion” and nostalgia for the mother, even as she contemplates her child for the first time at birth.
These legends highlight the necessity for parents and the newborn to forget what happened during pregnancy and erase their acquired knowledge. Keeping the memory of it might be dangerous for parents and, specifically, for the child. This idea anticipates Freud’s discovery, namely oblivion at birth (that is, original repression) of past experience and unconscious fantasies at work during fetal life.
Being born and becoming a parent are no simple tasks for human beings. The maternal relationship with the child develops over the course of pregnancy and is made up of surges of passionate love, but also of rejection. As a matter of fact, the feeling of plenitude and close communication conceals unutterable anxieties and fantasies. We will try to expose these anxieties, to identify the fantasies and dreams they engender, because we believe that, whenever they remain unconscious, they may induce a few issues at childbirth. The hypotheses put forward in our book are based on clinical evidence in close contact with women, especially those who suffer from bulimia and anorexia. Their repetitive movements, their compulsion to eat or fast, led me to understand that they suffered from fetal reminiscences; more precisely, that they were struggling with the anxieties and traumas they had known before they were even born. My work with pregnant women has allowed me to establish that they often go through moments of crisis, due to the changes experienced and that may, in time, generate problems for mother and child alike. Therefore, I felt it was important to identify these complications in order to prevent frequent accidents of pregnancy (miscarriage, premature delivery, Caesarean section …), but also the various disorders of self-perception and behavior in the child after birth. Several assumptions made here are beginning to be proven right by some recent research in neuroscience. References to this research can be found at the end of the book. Our work seeks, first and foremost, to have a preventive function for mothers and professionals who accompany them.